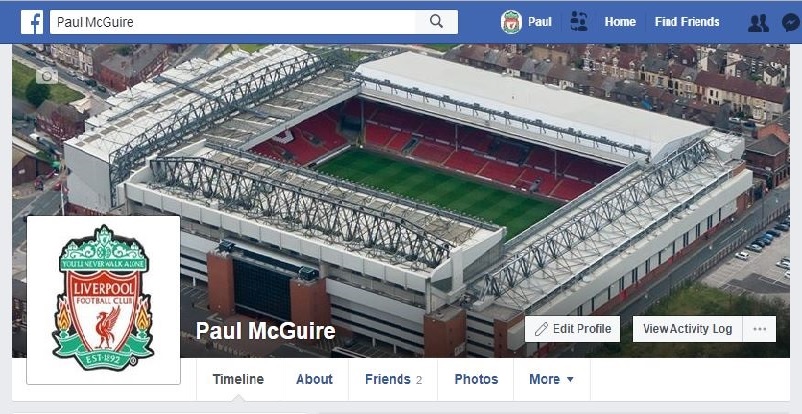 A 45 year-old Irishman with a wife and 3 children has the Liverpool football club crest as his profile picture on Facebook. Paul McGuire from Drogheda in Co. Louth also has an aerial view of Anfield as his cover photo and sees nothing sad about either.

“Liverpool define me.” Paul told us. “It’s who I am. Nothing matters more to me than the ‘pool so it’s only right that’s what people should see when they visit my page. Don’t get me wrong, I love the wife and kids too but their achievements hardly compare now do they? Come and see me when you’ve won five European Cups love. Maybe then we can talk about including you in my profile picture.”

Of course Paul is not alone. Damien Egan is a born and bred Dubliner with a wife and two beautiful twin daughters so naturally his profile picture is the Manchester United crest.

“I live for United.” said Damien. “I work away all week so it’s good to know I have something special to come home to on weekends. United on the telly. The thoughts of Pogba and the boys keep me going all week. The missus and kids know better than to disturb me when the football is on so they usually feck off into town or visit friends. The kids bedrooms are covered in United posters too. They wanted some Disney shit but fuck that.”

Brian Fitzpatrick is chairman of Galway’s Manchester City supporters club and has been supporting his beloved City for well over two years now having previously supported his beloved Chelsea. Brian’s son Ciaran is a promising young footballer and recently made the local papers after scoring a hatrick for his school’s under 12 side in the regional Schoolboy Cup Final. It was a proud day for Brian who changed his Facebook profile picture that night to the Manchester City crest.

“Yeah Ciaran’s achievement was great. I heard he played well too. I might’ve gone to it if it wasn’t on the same day as the Manchester derby. You need to get into the pub early on derby day or you won’t get a good seat. We beat the scum 2-1 that day too. It was incredible. I’m delighted Ciaran scored of course but let’s be honest, scoring in a field in Galway in front of a hundred people is hardly up there with scoring the winner against United in front of the Stretford End. I still get quite emotional just talking about that. It was one of the proudest days of my life. Come on City!!”

Experts say the profile picture we choose on social media says a lot about us and represents who we are as individuals. It shows the world how we see ourselves and apparently lots of Irish people see themselves as an English football club.