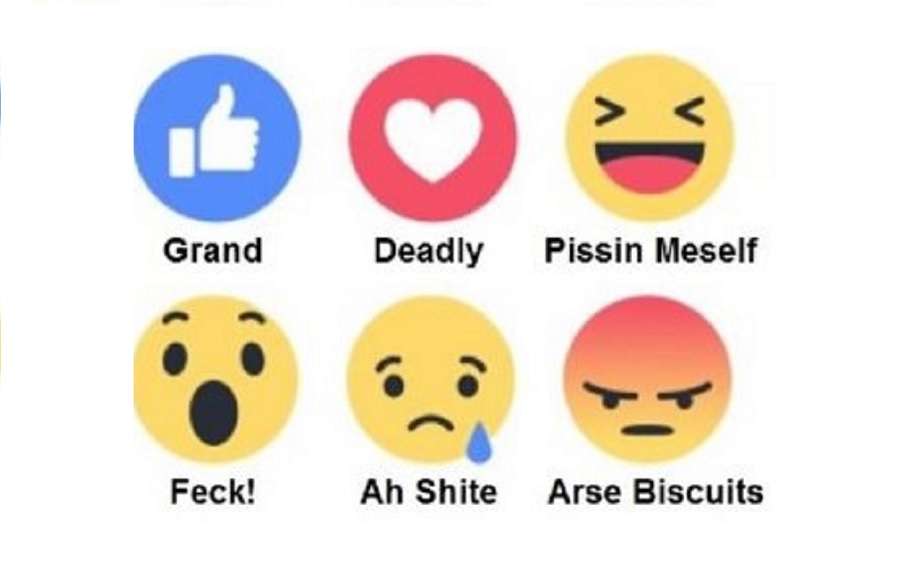 Facebook has announced that it will soon launch Irish emojis and we at Ireland on Craic are the only publication in the country to be given a preview of what the new symbols will be called. Here we bring you an exclusive look at the new Irish emojis along with Facebook’s official explanation for each one.

In most English speaking countries the word ‘grand’ means huge or very impressive. In Ireland it simply means good or nice or that something meets your approval. It’s the most used word in Ireland and every Irish person says grand approximately 9,000 times a day. Everything in Ireland can be grand from the weather “Grand day” to a lady’s bottom “Grand arse”.

The word ‘deadly’ usually means dangerous but not in Ireland. If an Irish person tells you something is deadly, fear not. They’re simply saying that it’s brilliant. Anything that’s better than grand is deadly.

Example:
Mary: “What do you think of me new boobs?”
Tom: “I think they’re deadly.”

A term for urinating in one’s underwear, Pissin Meself describes the act of laughing uncontrollably at something hilarious.

Example:
Tom:”I feel for the Brits and what they’re going through with this brexit shambles. I sincerely hope it all works out well for them.”
Mary:”Haha very funny Tom. I’m pissin’ meself here.”

Obviously the word Fuck is considered vulgar and unacceptable in most everyday situations. However, rather than just not use it like other nationalities, the Irish simply removed the letter ‘u’ and replaced it with an ‘e’ creating the perfectly acceptable alternative word Feck. On it’s own it can express a feeling of shock or surprise.

‘Ah shite’ can be a way of portraying a feeling of disappointment. It’s also an expression of sadness or one of sympathy for an event or situation.

Example:
Tom: “You may go to mass without me this morning Mary. You know me arse does be brutal after a night on the Guinness.”
Mary: “Ah Shite!”

Arse biscuits are bits of shite that cling to arse hairs and stay there until they go crusty like biscuits. They are usually only found on men as women do not tend to have hairy arses, although this is not necessarily always the case, particularly in parts of Mayo where the level of arse hair growth does not differ hugely between men and women. The term Arse Biscuits gained universal appraisal after featuring in an episode of Father Ted in which Mrs. Doyle asks Father Jack if he would like more tea and Jack shouts back “Arse Biscuits!” It is mostly used as an exclamation of anger, an expletive or an outburst of annoyance.

Example:
Mary: “My Mother’s operation was a complete success and doctors say there’s no reason why she shouldn’t be around for at least another 20 years.”
Tom: “Arse Biscuits!!”