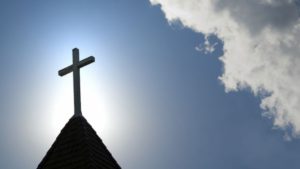 Fed up with increasing incidents of famine, drought, starvation, natural disasters, plagues and general mayhem across planet earth, God believers of all descriptions from Bangkok to Ballybunion have began losing patience with the Almighty, leading many to question what sort of person he really is.

In the southern states of the USA known as the bible belt for example, recent hurricanes have killed thousands of innocent people and destroyed countless communities. 63 year old Oklahoma resident Ralph Johnson has lost 2 houses, a wife and 4 dogs to hurricanes in the last 3 years. “I’m a devout Christian and I’ve never done any harm to anyone in my life. I’ve always believed that God was all powerful and that he created everything. My wife Betsy was the same. Well if that’s true then he was responsible for the 120 mph wind that lifted Betsy off the ground and sent her flying head-first through the window of the local Walmart. What the hell was that all about?”

In parts of Africa ravaged by drought and famine, some people are also beginning to question what exactly the man upstairs is playing at. Mwengwe lives in famine stricken Somalia. “We’re currently experiencing the worst drought in living memory. We have no rain to grow food to eat. Thousands of people starve to death here every day. If God would just send us some rain everything would be fine, but he doesn’t. Why not? What sort of God would do that? To be perfectly honest – and I don’t care who reads this – I think God’s a prick!”

One of the most devastating natural disasters of recent times was the Indian Ocean Tsunami which killed a staggering quarter of a million people. 36 year old Ahmed Kalif lives in Indonesia. “I used to pray to God 5 times a day and then I would scream at non-believers “Allahu Akbar! God is great!” Well guess what, God is not great. God is the kind of guy who wipes out your entire family with a thirty-foot tidal wave. All that time I wasted praying when I could’ve been doing something more useful and productive. Like scratching my balls.”

Not all believers however are turning against their Gods. Reverend Graham Billington is an Evangelical Preacher based in Florida. We asked him if he could shed some light on the subject and he explained exactly what’s happening on our planet. “It’s very simple really. The Lord works in mysterious ways and anyone who questions this will burn and choke and scream in agony in the flames of hell for all eternity. Now piss off!”