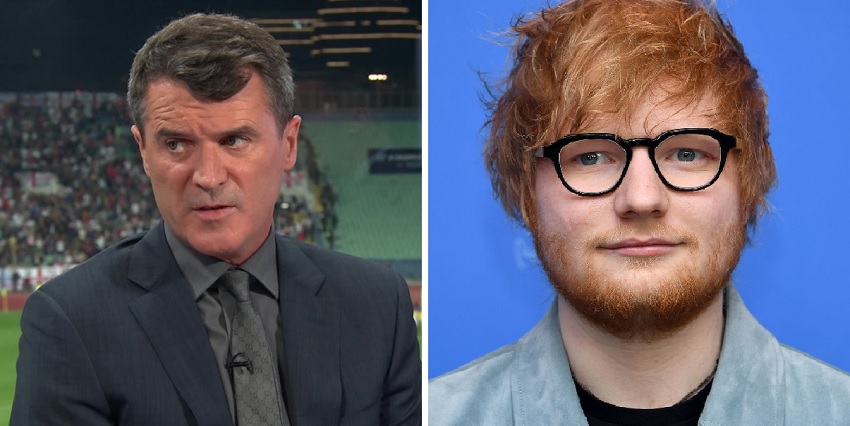 Roy Keane has let fly at singer Ed Sheeran, describing him as overrated and not good enough. The controversial Corkman is well known for his scathing punditry and didn’t hold back while talking about chart topper Sheeran.

“I watched his performance at Glastonbury on the telly a year or two back and I fell asleep after 20 minutes. It was like he just stood there and played the same song ten times. The same miserable, terrible song. Frankly it bored the arse off me. He’s a pub singer who got lucky.”

Keane went on to compare Sheeran to several performers he rates highly and claimed he’s just not in the same league.

“Fans react to what they’re seeing and honestly the boy sent all 80,000 of them into a coma. Where’s the bass player? Where’s the drummer? The lead guitarist? He’s clearly not a team player. You don’t see one of The Frank and Walters lads turning up on his own to do a show. Now that’s a proper band. Go and see them play live. Or The Sultans of Ping, or Microdisney or Fatima Mansions, or Fred. Or Gina Dale Haze and The Champions.”

Keane went on to name every band that ever came out of Cork. He also said anyone who pays to go and see Ed Sheeran live needs to give their head a good wobble.

“Sheeran looks lost on the big stage. If I was there that day I’d have asked for my money back. There’s only one ginger superstar in this world and he goes by the name of Scholesy – that’s Paul Scholes to you – and this guy isn’t fit to lace his boots.”