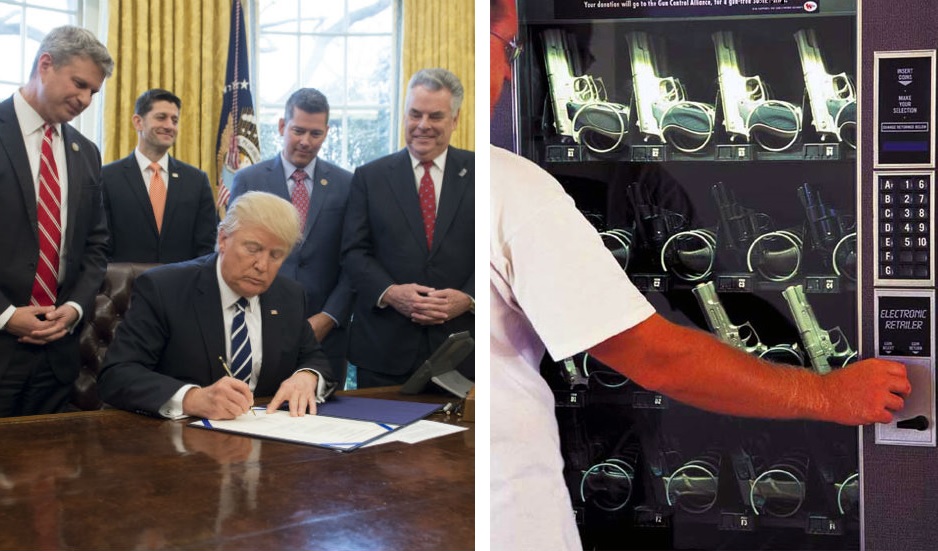 U.S. President Donald Trump fulfilled one of his election campaign promises this week when he legalised gun vending machines. The new weapon dispensers will soon be available to use in all 50 states and the President and his supporters hope they’ll become a common sight in shopping malls, airports and bars across America.

The most controversial part of the new legislation is that it also allows for gun vending machines to be installed in schools and so far more than 18,000 colleges and high schools have ordered one. At a rally in Texas the day after signing the bill a defiant Trump hailed it as a great day for America.

“The next punk who tries to shoot up one of our schools is in for a big surprise.” he told an enthusiastic crowd. “From this day forward our children will be heavily armed and ready to kick some ass.” Trump’s supporters immediately erupted into cheers and began firing shots into the air while chanting “U.S.A. U.S.A. U.S.A.”

Every year more people are shot dead in the United States than in any other country on Earth but the President and his supporters do not believe America’s gun culture is to blame.

“Gun massacres are not gun related and this is not a gun issue.” explained Mr. Trump. “Guns don’t kill people, people kill guns. Or whatever way that goes. I can’t remember. What I’m trying to say is people have mental issues but guns don’t, therefore guns are great and people are awful so don’t go blaming guns because they’re not mental, you are. You’re mental.”

We spoke to Chuck Johnson – head of one of America’s biggest gun enthusiast groups Christians 4 Guns – and asked him if he really believes having gun vending machines in schools is a good idea.

“I can understand why people are concerned when they think about little kids going around with these big guns but that’s simply not going to happen.” he assured us. “The gun manufacturers are making small guns that fit perfectly into the hands of children. They’re just as powerful but the smaller size means kids can get a firm grip on their weapons and comfortably blow some mother fucker’s head clean off without hurting their little hands.”