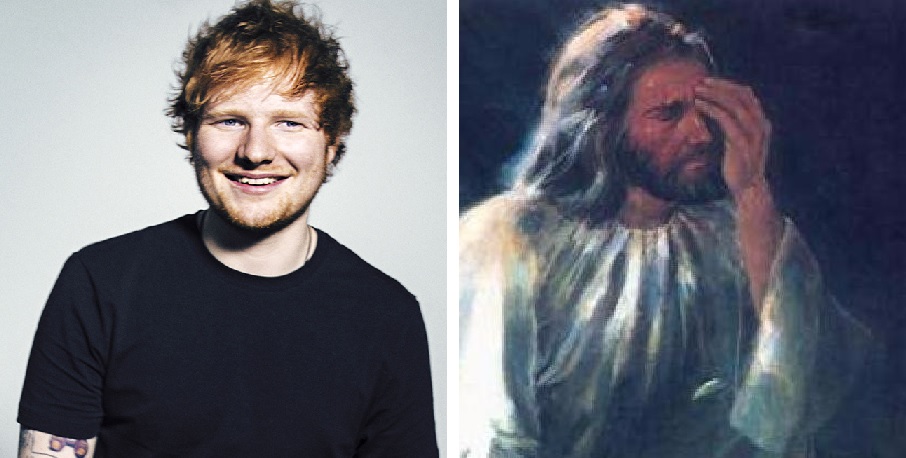 More people will attend an Ed Sheeran concert than mass in Ireland this week. The incredibly popular ginger-pubed singer is currently in Ireland playing a series of sold-out shows and by the end of the tour, his concerts will have been attended by at least one member of every family in the country.

The alarming slide in the number of Irish people going to mass however has the Catholic Church here in freefall and there will be approximately twice as many people going to see ginger balls in concert than those attending their local church.

We asked God how he felt about the current situation in Ireland (one of the lads in the office has his number).

“It’s hardly surprising now is it?” said the Almighty. “You’ve got a choice between going to hear Ed Sheeran or some old git reading the same dreary passages from the bible for the hundredth time. Even I’d pick old orange balls over that rubbish. Catholic mass is soooo boring. I’ve got two words for you people. Black. Americans. Now that’s how to worship your God. Singing and dancing and losing your shit.”

Not only is copper-knob Sheeran the biggest popstar on the planet, he’s also officially the most famous person who has ever lived, beating the likes of Shakespeare, Elvis and Adolf Hitler. In fact he sells so many records that in one particular week last year he had 11 singles in the top 10.

We asked Ed, whose pubic hair is ginger, if he now has everything he’s ever dreamed of or is there anything in life he hasn’t yet acheived that he’d really like to.

He told us “Yes. There is one thing. I really wish people would stop constantly referring to the colour of my pubes when writing about me.”